Dedicated in 1950, the entire complex was not completely finished until 1952. The building featured a large gymnasium, lockers, office space, meeting rooms, and a large kitchen. The adjacent playing fields used by Powhatan Youth groups today was “dug out” by an Army surplus bulldozer obtained through the efforts of then School Superintendent J.S. Cardwell. The original bleacher planks were provided by three local lumber companies (Ball, Goodwin, and Palmore). Dunn Chevrolet fabricated the metal framework for the spectator stands. The gymnasium was used by Powhatan High School, and later by Huguenot Academy for basketball games and school events such as proms through the 1950’s and 60’s. community dinners and dances were also held there frequently.

At age 60, the building is still a useful facility and source of pride for the citizens of Powhatan County. In May of 2014, after working with the County of Powhatan for over a year, a decision was made and the War Memorial Building was purchased for $10.00.

Most local residents can easily recognize the large white building located on Skaggs Road just past the village area. It is situated across the street from the Powhatan County School District Administration Offices and the Ace’s Diamond sports complex. The structure is Powhatan County’s War Memorial.  The rear of the building can also be seen from Angerson Highway.

Read more about the WMCACC

The mission of the War Memorial Cultural Art and Community Center is threefold:

Provide an outlet for creative community involvement, while seeking to produce quality entertainment through various forms of the cultural arts.

Provide appropriate and respectful recognition for our community’s veterans and those currently serving in all branches of the armed forces.

Provide a quality facility that can be utilized for activities that enrich, support, and enhance a sense of community.

Your donation is tax-deductible

Monetary funds are always needed for day to day operations expenses as well as renovation and capital improvement projects. Additionally, materials, supplies, logistics, and other “stuff” are needed to help is fulfill our mission. Our thoughts about donations; It’s extremely important when you’re making a decision about donating money that the organization you intend to support is: 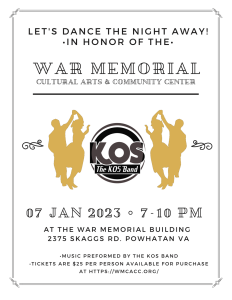